An ordinary tale of civil war 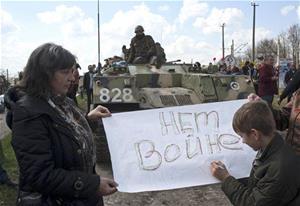 Civilians halt a tank column outside Kramatorsk. The sign reads, "No to war"

I met Volodya* in early November. He is just a young man of 23 who wants to pursue a career in design. He is not exceptional in any way, and by that I don’t mean to be disparaging; I simply mean he could be a young man from anywhere, with the hopes, joys, sorrows and desire for fun that any young man might have. Except he is not from anywhere.

Volodya is from Kramatorsk, a mechanical engineering and industrial centre of over 160,000 in eastern Ukraine. Or to be more precise, it did have a population of 160,000. Since April, some 40 percent of its inhabitants have left the city. They now number amongst the million now displaced from Donetsk and Luhansk, the two eastern regions of Ukraine known as the Donbass. They are ordinary people who a few months ago would have had no reason to flee their homes.

Volodya left Kramatorsk in 2011 for Kiev but in May of this year he decided to return. His home city and its neighbour, Sloviansk, some 10 miles away, had been seized by armed pro-Russian separatists on 12 April. Kiev’s response was to send army units and volunteer militias to the east. In very quick order, Ukraine was tearing apart. Volodya began to worry about his family and elderly grandparents, now at the eye of the storm.

Then on 1 May when Kiev announced the re-introduction of conscription. Faced with the prospect of being forced to fight, and possibly to kill Ukrainians in his own town and region, Volodya decided to leave. He left Kiev, still thinking it would all blow over in a few weeks. It did not blow over, and after a few weeks Volodya would be very far from home.

From April through July, Sloviansk and Kramatorsk became key flashpoints in the battle between pro-Russian separatists and forces from Kiev, with Sloviansk suffering most casualties and damage. At first, the conflict existed in something of a virtual reality. Relatively small groups of separatists controlled administration buildings, mayors’ offices and police departments. There was little active involvement by the population and for Volodya and his family, daily life often continued with a semblance of normality.

People ran errands and strolled through the town’s attractive woodland park, the Yubileynyy, just coming to leaf in the spring sunshine. But these proved to be interludes; war soon came knocking on the door. Businesses closed and workers were laid off; energy supplies became increasingly disrupted; workers still ‘employed’ went unpaid; Volodya’s grandparents’ pension payments ceased. Buildings were hit by shellfire, no-one was sure from whom. Night after night, Volodya and his family lay in their beds, as gunfire and shelling from Sloviansk shook the night air and lit the horizon.

Volodya and most townspeople kept away from the centre, nervous of their new ‘leaders’. They had good reason. The separatists were led by far-right, great Russian chauvinists, neo-Stalinists, outright fascists or sheer adventurers and crooks. Igor Girkin, or ‘Strelkov’, who led the takeover of Sloviansk, was a prime exemplar. He had served in two Chechen wars; in the Serb ethnic cleansing of Bosnia; he had helped organise proxy Russian forces in Transnistria (a pro-Russian breakaway in Moldova) and finally played his part in the annexation of Crimea. In May he was appointed ‘Defence Minister’ of the ‘Donetsk People’s Republic’. His fantasy was to restore a Russian empire of the Slavs. He thought his time had come.

A few locals did join the rebellion but the separatists in east Ukraine were not greeted with flowers and the cheering crowds as in Crimea the previous March. Yet neither did the population turn out to oppose them. As Kiev forces indiscriminately shelled towns, and civilians, hatred for the government in Kiev became the dominant sentiment.

The decision by Kiev to launch its ‘Anti-Terrorist Operation’ against the east, supported by far-right and fascist volunteers, sealed local antipathy. This was tit for bloody tat. ‘Anti Terrorist Operation’ was the name the former President Yanukovich used for the deadly assault launched against protestors in the Maidan. The massacre of 43 pro-Russian protestors in Odessa by far-right nationalists led by the Nazi Right Sector, and the killing of civilians in Mariupol by Ukrainian army units, finally polarised the views of many of those hitherto reluctant to take sides.

When probed, Volodya was reluctant to comment on the politics and actions of Kiev. He shrugged his shoulders and with anger in his voice, said simply, “They should never have sent the army.”

Kramatorsk was the site of one of the most televised confrontations between civilians and Ukrainian soldiers during the entire conflict. Three days after Kiev launched its “Anti-Terrorist Operation”, a column of six armoured vehicles rolled up to the outskirts of Kramatorsk. Contrary to their expectations, they were surrounded by local people, enraged that the army was being sent against them. As soldiers were berated by unarmed men and women, one elderly local turned to shout at the camera: “Do I look like a terrorist? I’ve been planting onions!”

The soldiers, some merely conscripts, looked miserable and demoralised. An officer declared he would "never shoot his own people". Eventually, they abandoned their vehicles, which were then seized by pro-Russian separatists and paraded through Sloviansk in triumph, spinning in their tracks. It was an episode that in a way captured precisely the dynamics of the conflict.

Volodya was by no means alone in his decision to avoid fighting. It was the young men who were often the first to leave. The separatists had great difficulty in galvanising more than passive support. Girkin complained bitterly of the ‘cowardice’ of eastern Ukrainians, for refusing to sign up, particularly the youth: “Where are the young people… Maybe in the gangs that are currently robbing, looting and wreaking havoc in the province?” I don’t know if Volodya watched Girkin’s performance.

If the separatists had difficulty in recruiting volunteers, this was no less true of the Ukrainian military. Even the most compliant of potential conscripts may have thought twice about the draft. The army was hopelessly under-equipped. Ukraine’s ruling class had been more afraid of their own population than external foes. The number of interior troops and police per head of population in Ukraine was twice the world average.

But the military did not just suffer from lack of expenditure. Military procurement was a prime target for corruption. Over-inflated sums were paid for sub-standard equipment, or for military ‘purchases’ that were simply never delivered. Senior officers sold off as much as they could get away with. As for the conscripts, the salary of a conscripted soldier is a mere $185; the median monthly salary in Ukraine, the lowest in the region, is about $260.

Soldiers had to rely on charity organisations for flak jackets and sleeping bags. Families that can afford it buy their sons winter gear, decent uniforms, body armour or even gun sights; alternatively, in time-honoured fashion they can pay a bribe for a medical exemption or removal from the draft list. (The going rate is about seven times the average monthly salary).

Faced with a decrepit military, and the reluctance of many conscripts to risk their lives, small groups of armed separatists were able to achieve early victories. Kiev tried to tap ‘patriotic’ loyalties and asked ordinary Ukrainians to donate their savings to the defence budget. $2 million was raised from citizens texting 565 on their mobile phones but this was hardly going to turn the tide.
On 16 June, Interior Minister, Arsen Avakov, announced the formation of 30 volunteer battalions. Some of these were ideological, far-right volunteer units such as the Azov battalion, led by the Nazi, Andriy Biletsky and backed by far-right Radical Party leader, Oleh Lyashko. Others were private armies raised and funded by Ukraine’s oligarchs.

However, many of the separatist volunteers are not particularly ideological either. A close relative of a friend in St Petersburg joined up via a volunteer call line. He was unemployed, his personal life was falling apart and he was promised up to $500 a month. He is now in hospital in Donetsk with his leg was shot away after a battle for Donetsk airport.

The pro-Kiev private armies and volunteer militias did help turn the tide. Igor Girkin was forced out of Slovyansk, first to Volodya’s home town of Kramatorsk, then back to Donetsk. Kramatorsk returned to Ukrainian government control. However, this was not the only factor. The separatists had over-reached themselves. Putin’s aim was to destabilise Ukraine not occupy it and he limited the support flowing from Russia.

By late August, it seemed the separatists might be routed. Putin now released sufficient troop detachments and weaponry to halt the Ukrainian army and its volunteer battalions which were thrown into partial retreat. President Poroshenko turned to Nato but like Putin the US and EU sought maximum advantage from Ukraine’s internal divisions; they did not intend to risk all-out conflict. Poroshenko was refused the arms he needed. At this point a tenuous ceasefire was reached.

Whatever the military outcome, lasting divisions and hatreds have been sown. Over 4,000, mainly civilians, have been killed. The politicians in Washington, Brussels, Moscow and Kiev will use these divisions to their own best advantage with scant regard for ordinary Ukrainians, east or west.

He refuses to comment on politics. When asked about the future, he stares at the table, “Ukraine has no future. It’s all gone to hell.” He just wants peace and to become a successful designer. His dream is to go to Canada.

Volodya now ushers guests to their entertainments at a Red Sea hotel resort, popular with Russian tourists. He had a contact in the tourist industry. The resort needed a Russian speaker who would accept the scrapings to be made from tips. Tippers are few however - the consequence of another ‘War on Terror’.

Volodya’s story and the circumstances that drove him to seek another life is in a sense unexceptional. This is no first-hand account of fighting, death, kidnapping or atrocity. He is just an ordinary young man forced to flee his home for fear he will be forced to fight in a civil war.

Volodya steadfastly refuses to take anyone’s side. However, in a very important sense, I am certainly on his.

*I have changed names