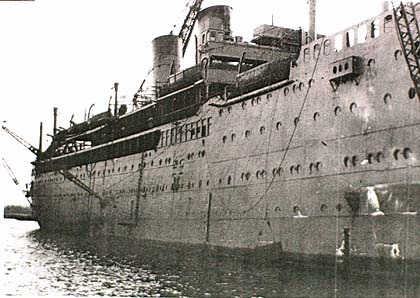 Enough of all this pretence of Britain as a past haven for refugees, particularly from wars it has a stake in.

In spring 1940, my mum was one of tens of thousands of Jewish refugees, anti-Nazis, Communists and ‘economic’ immigrants facing mass internment as “enemy aliens” - at the hands of a cabinet whose Britain’s foremost appeasers, Chamberlain and Viscount Halifax still commanded support of most of the establishment.

The Daily Mail and Daily Express (plus ça change…), who had supported Hitler and the fascists before the war, had long called to “Intern the lot!”, including Jews and Communists. Jews, who made up eighty percent of refugees, were portrayed as a potential fifth column, open to blackmail by the Nazis, who could use their relatives as hostages. H.G Wells and others argued that the alien threat was played up to divert attention from the real fifth column who, after the fall of France, wanted to compel Churchill to sue for peace with Hitler, or replace him.

Many officers in the military and security services viewed refugees, Jews and Communists simply as ‘a threat to the realm’. In 1939, the London Evening Standard ran a headline, “Hitler’s Gestapo employing Jews spying for England”. In May 1940 the BBC allowed the British Minister at the Hague to broadcast his view that a refugee fifth column had been responsible for the fall of Holland and that the public should suspect any refugee with German or Austrian origins.

Herbert Morrison, the Labour Home Secretary in the coalition government, defended government policy. He argued there were "already 100,000 refugees, mainly Jews, in this country. There was considerable anti-Semitism under the surface in this country. If there were any substantial increase in the number of Jewish refugees we should be in for serious trouble."

The fall of the Low Countries and France served as an opportunity to turn establishment hostility towards refugees, particularly Jews, into a justification for mass internment; Churchill issued the order to “Collar the Lot!”. In all 27,000 were interred. Most of the ‘Germans’ were Jewish refugees. In one Isle of Man camp over 80 percent of those interned were Jewish. Others were opponents of the Nazis or simply innocent immigrants who had settled in Britain.

On 1 July 1940, the Arandora Star sailed from Liverpool, bound for Canada, with a total of 1,574 people aboard, 1,213 of whom were internees, in a ship built to take 250 passengers. Most were refugees (many of them Jews) or Italian migrant workers who had lived in Britain for up to 40 years but had not take British nationality. The Arandora was nothing less than a floating prison camp.

On 2 July, the liner was torpedoed and sunk with the loss of 714 lives, most of them internees, many trapped in the barbed wire barricades strung along the decks and railings to partition and cage the internees.

The British government was totally unrepentant. At the inquiry that followed, a government spokesman, the Duke of Devonshire, justified the decision to deport the refugees to the Dominions with the words: "It seemed desirable both to husband our resources and get rid of useless mouths and so forth."

Worse was to come. On July 10, just one week after the Arandora Star sank, almost all the survivors, 400 in all, many mourning the loss of loved ones and friends, were forced, with 2,000 other internees, onto the HMT Dunera to run the U-boat squadrons again, this time bound for internment in Australia. The Dunera was indeed targeted by another U-boat; two torpedoes narrowly missed.

On board, the internees were beaten and robbed by the military guard under the command of Lieutenant-Colonel Scott. What wasn’t worth stealing was thrown overboard. The survivors of the Arandora were only beaten. They had no possessions left.

Scott put on record his view that the Nazi Germans on board the Dunera were ‘of a fine type, honest and straightforward, and extremely well-disciplined’, whereas his Jewish charges were ‘subversive liars, demanding and arrogant’.

The sinking of the Arandora Star sparked a public revulsion against the internment of refugees and by August 1940, the government was forced to reverse its policy.

My mum was a Hungarian Jew who arrived in Britain in the 1930s. Her family had opposed the Hungarian dictator and ally of Hitler, Miklos Horthy. As a young woman, she was involved with anti-fascists in Vienna; in London she collected money and supplies for the International Brigades and helped harbour fighters returning from Spain.

In the spring of 1940 she faced internment as the anti-alien hysteria mounted. She and Dad took the decision to marry in a rushed wedding in June 1940, as the government launched the refugee round-ups. One of their witnesses was a passing building site labourer eating his sandwiches in his lunch break. I cannot imagine that he did not understand the circumstances. Press hysteria over the “enemy within” was at its height; Churchill had just issued his cabinet directive, “Collar the lot!”. And here was my father rushing into the street outside Islington registry office to find a second witness to the marriage of two Jews, (Moses Faitelson and Sophie Popper), my mum still speaking only halting English in a heavy east European accent.