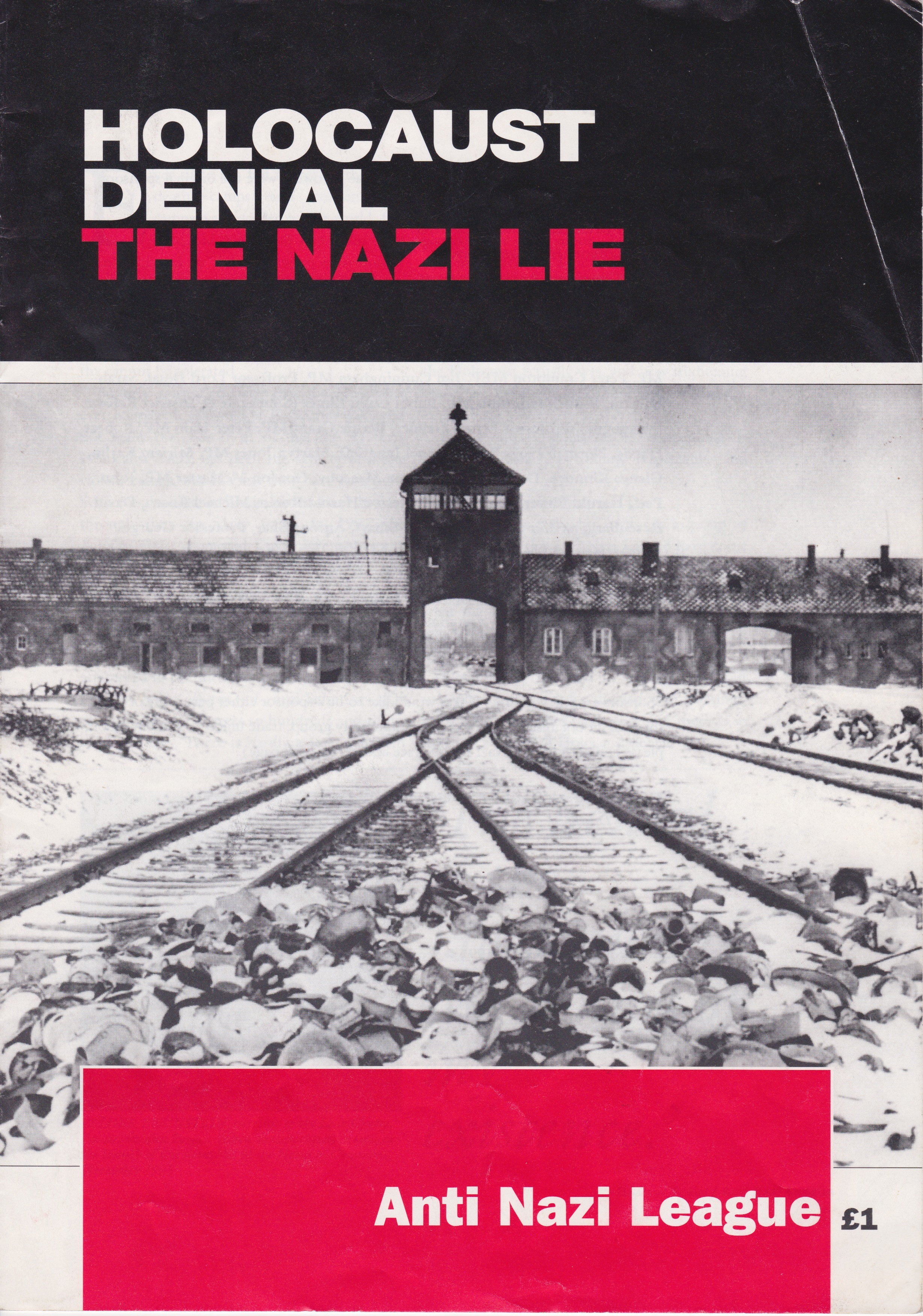 In November 1992, a group of Jewish socialists anti-Nazis came together to co-write the Anti-Nazi League Pamphlet, Holocaust Denial: The Nazi Lie. They included the poet and writer, Michael Rosen, myself, John Rose, Mike Simons and convenor of the newly re-launched Anti Nazi League, the late Julie Waterson.

I regard this as one of the most important political projects I have ever been involved in.

The pamphlet was produced in response to the rise of Holocaust denial. David Irving, the leading proponent in Britain of this Nazi lie, was gainig wide publicity, treated as a respectable historian by sections of the media and even some historians.

The argument that his views deserved a platform as free speech" was widely held. The Guardian gave him a platform with a special feature. There was no room for doubt on Irving. As early as 1977, in Hitler's War, his attempt at an apologetic for Hitler, he declared Anne Frank's Diary to be a "forgery".

The historic fact of the Holocaust posed a huge barrier to Europe's re-emerging Nazi movements: the British National Party (BNP) in the UK; the Front National, led by Jean Marie-Le Pen in France; the Austrian Freedom Party led by Jorge Haider and their fascist compatriots across Europe.

Holocaust Denial was an attempt to clear the path to build a wider base amongst those not yet hardcore fascists. To hardcore Nazis they were speaking a well understood code: when they said the Holocaust didn't happen, they meant it did not matter that it happened.

The campaign against Irving saw Holocaust survivors such as Esther Brunstein and Leon Greenman step into the public arena to give personal testimony. They played a highly prominent role in building the Anti-Nazi League. They and other survivors sponsored this pamphlet.

Survivors spoke across the UK, in schools at anti-racist and anti-fascist meetings and on marches, protests and demonstrations. The BNP had won a victory in the Isle of Dogs with the election in 1993 of the seig heiling Derek Beackon. The threat of a growing Nazi movement was real. The presence of the BNP HQ in Welling, in south east London, had fuelled a wave of racist attacks and murders in the area, including Stephen Lawrence, Rohit Duggal and Rolan Adams.

A 60,000 strong Unity March was held to shut down the Welling HQ. It was led by Auschwitz survivor, Leon Greenman, a central figure in the battle against Irving and Holocaust Denial. (His exhibition can be seen at The Jewish Museum)[https://jewishmuseum.org.uk/about-us/history/leon-greenman-2/].

The pamphlet helped the movement isolate Irving, and wreck almost every attempt to provide him a platform. It was produced in many thousands of copies, over many reprints and three editions. It was widely sold at anti racist and anti fascist meeting and demonstrations; it was used as a resource by teachers and was a key tool in the mass campaigns that demolished the British National Party by the mid-1990s.

By the mid-1990s his attempt to establish a reputation as a "historian" was wrecked. Every meeting and event he attempted to hold was picketed, disrupted and wrecked. Venue after venue were persuaded or forced to deny him a platform.

It was at this point that he attempted to rescue something from the wreckage of his "reputation" by launching a libel action against a prominent historian on the Holocaust, Deborah Lipstadt. He was utterly humiliated, not least by the evidence of the historian Richard Evans.

Why put this pamphlet back into the public domain now?

First Holocaust denial permeates far right, white supremacist and neo-Nazi websites and social media platforms with a significant audience and influence. It is being promoted, sometimes in diluted form by far right governments across Europe, such as in Hungary, Poland and elsewhere.

Secondly, antisemitism, like any form of racism can penetrate the left and movements of the oppressed, including for example over Palestinian freedom. It has to be countered without quarter. Antisemitism is a reactionary ideology that only serves to undermine the fight against oppression, racism and colonialism.

However, the immediate reason for this blog piece is motivated by a concern that some on the left are in danger of retreating from our hard won battles against Irving, Holocaust denial and no platform for Nazis.

The weaponising of the charge of antisemitism by pro-Zionist supporters of Israel and right wing opponents of the left can lead to a danger of a bunker mentality. A battle line can be drawn in such a way as to obscure a wider war. On one side the anti-Zionist left - on the other the pro Zionist camp and the right.

But this is not the only battle line. At a recent meeting against the witch hunt in Labour, noted academic Norman Finkelstein declared David Irving to be "a very good historian". He cited authorities, some of whom Irving had relied on in his libel action, but that were comprehensively dealt with, not least in the trial. Finkelstein contemptuously dismissed the key witness in the trial, Richard Adams. He further went on to say that he did not know what Holocaust denial means.

Finkelstein is neither an antisemite nor a denier. But he is opening the door to our foes and unchallenged, in danger of wreaking great damage to the left and the anti racist and anti fascist movement.

Rather than challenge Finkelstein, some on the left are defending his formulations and the legitimacy of describing Irving, a Nazi Holocaust denier as a historian. This points to the danger of a wider retreat from unconditional opposition to antisemitism and denial.

This version of the pamphlet is the third edition from 2000 and includes a section on the libel trial against Lipstadt. It includes sections on Who is David Irving? and What about freedom of speech?

My recent pamphlet Antisemitism, the far right, Zionism and the left is available from Bookmarks